A brief history of social media 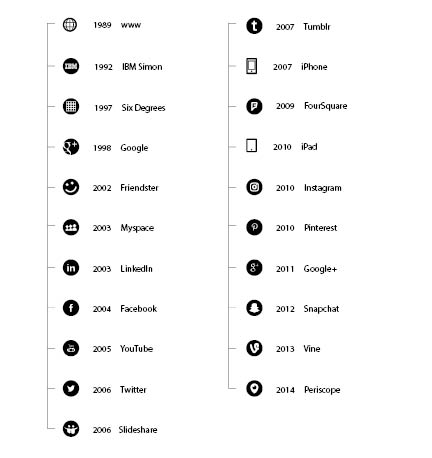 Social media has been evolving since Sir Tim Berners-Lee invented the World Wide Web in 1989.

Six Degrees, launched in 1997, is considered to be the first social network (it closed in 2001). It enabled users to upload a profile and make friends with other users, but at this time the internet’s infrastructure wasn’t really ready for social networking and, while the site had millions of registered users, its growth was limited due to the low numbers of people connected to the internet.

By 2000, around 100 million people had access to the internet, and it became quite common for people to engage socially online.

Friendster was founded in 2002 (and closed in 2015), pioneering the online connection of real-world friends. Myspace (founded in 2003) was the largest social networking site from 2005–08, when Facebook overtook it. Before long there were dozens of other websites providing social media services. Flickr was one of the earliest photo-sharing sites. Tumblr, a microblogging website, started in 2007, and Foursquare, a location-based app, was also quite popular for a while (it was founded in 2009). From 2003, when LinkedIn was launched specifically for professionals, social media also became popular for businesses and marketers, who could see the opportunities it presented.

Fuelling the growth of social media is, of course, the smartphone.

In 1992 IBM showcased the IBM Simon at the 1992 COMDEX (Computer Dealers’ Exhibition): in doing so, they introduced the world to the first smartphone. It was the first time telephony features had been combined with the features of a personal computer.

The term ‘smartphone’ was first introduced in 1995, the Blackberry gained mass popularity in 2006, but then Apple introduced the iPhone in 2007 – one of the first smartphones to use a multi-touch interface. Smartphones have become an important part of daily life, in terms of providing connectivity and efficient ways of working.

Can you remember the first social media profile you set up? Can you recall your first Tweet?

This is an extract from my book – Relax! It’s Only Social Media. Download the first chapter, free.