How a LinkedIn post turned me into a CommsHero

On a Monday morning, August 2014, I posted on LinkedIn: “Why social media shouldn’t replace face-to-face conversation”.

It was clearly a subject that resonated – within hours the views passed 1,000 and it kept going (it has now had over 10,000 views).

The link was being shared on Twitter and comments were appearing in my inbox.

I knew this new long form feature LinkedIn had introduced could be powerful, but until this point I didn’t realise how much!

Then I received a message that meant I could move away from social media – it was time for a phone call!

Asif and I chatted. This was our first conversation. We were not previously connected (though in LinkedIn terms we were 2nd level connections).

We agreed that I would present at two events that were being planned (Bristol and London). The topic of the blog was apparently perfect for the closing session of a day-long conference for CommsHeros. 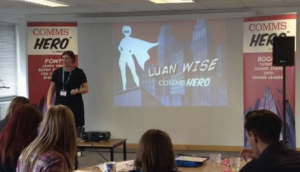 I have never before attended an event so meticulously planned down to the goody bags, labelled Krispy Kreme donuts, table decorations and paper plates. You couldn’t escape the feeling of empowerment from a relatively small group of Comms people who were able to come together to collaborate and share ideas.

This doesn’t happen with every LinkedIn post, but it does demonstrate the opportunity that is available to any LinkedIn user. It’s a level playing field – you’ve just got to take part.

I got to speak again at CommsHero 2015 and am now looking forward to the next events in Cardiff and Manchester.